BCC/DHL: Give UK businesses the confidence they need to trade internationally

Many UK exporters are treading water at a time of deep uncertainty, according to the latest Quarterly International Trade Outlook from the British Chambers of Commerce, in partnership with DHL.

The survey of 3,400 exporters found nearly two-thirds (63%) of manufacturers report exchange rates as a concern to their business, indicating the pressure from sterling volatility.

The results reflect the negative impact that slowing global trade, currency fluctuation and Brexit uncertainty is having, with export sales and orders weakening. In Q2 2019, the balance of manufacturers reporting export sales increased stood at +14, down from +24 in the same quarter last year. In the services sector the corresponding balance fell to +8, from +17.

The balance of exporting manufacturers that have increased orders also fell to +9, down from +21 in the same quarter last year. In services it fell to +5 from +14, indicating that the ongoing uncertainty is hitting orders books and creating difficult trading conditions for many UK exporters.

At the same time, the volume of trade documents issued by Accredited Chambers of Commerce for goods shipments outside the EU fell 2.1% in the second quarter of the year and stands 3.0% lower than the same quarter in 2018. 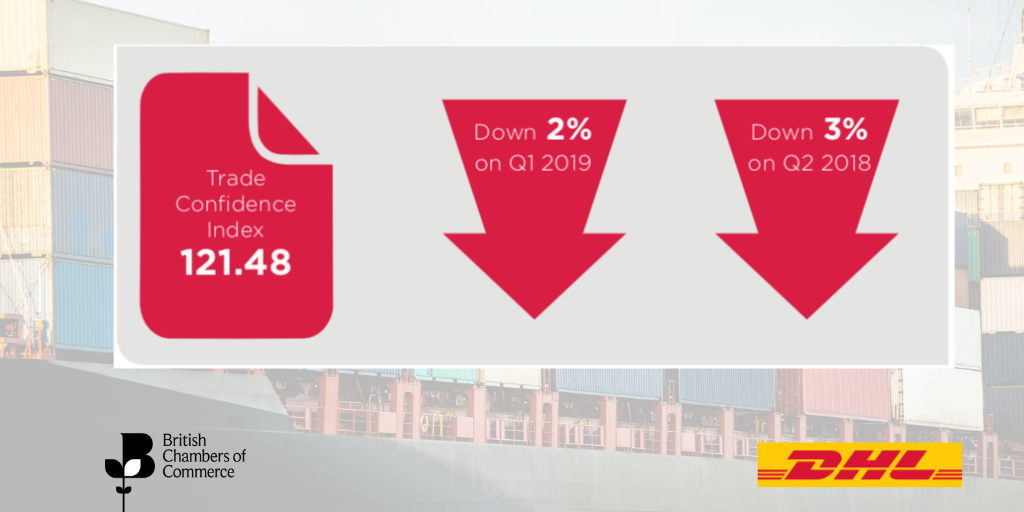 In the event of no deal, businesses will face an immediate and abrupt change in trading conditions, for which many remain unprepared. Business has been clear about wanting to avoid a messy and disorderly Brexit but given that no deal remains the default position on October 31st, the new government must urgently ramp up its preparation.

Business is calling on the new government to ensure the conditions and logistical preparations are in place to protect continuity of trade after the UK’s departure from the EU. Firms that currently trade with the EU will need an EORI number to continue in the event of no deal, yet the number of firms that have registered remains worryingly low. The British Chambers of Commerce is urging the government to automatically register all VAT-registered firms to minimise the disruption and administrative burdens facing traders.

The Department for International Trade must also make every effort, working with governments in third countries and the EU-27 to grandfather existing EU Free Trade Agreements, which so many firms rely on to be competitive in key markets around the world. Many businesses report the lack of clarity around future terms of trade, including tariffs and customs procedures, is adding to the feeling of uncertainty and lack of confidence.

“There is real frustration among business communities across the UK at the lack of clarity about trading conditions after the UK leaves the EU, and we’re already seeing the impact of that uncertainty.

“While the majority of firms want the government to avoid a messy and disorderly Brexit, we’re calling on the government to put practicalities first and implement measures to ensure firms are as prepared as possible for the whatever scenario they face. A crucial first step would be to automatically issue all necessary companies with an EORI number to minimise the hoops that firms need to jump through to be ready for day one.

“There are many fundamental outstanding questions relating to the rules and processes of trade in the event of no deal. While the Department for International Trade has been working with third countries to ensure the rollover of existing FTAs, many of these critical arrangements have not yet been formally agreed, and firms can’t plan for the future based on warm words. Maintaining preferential access to countries where the EU has trade agreements is critical to maintaining competitiveness in key markets.”

“The 2.1% fall in the Trade Confidence Index compared to Q1 2019 is a strong indication that UK firms, despite a solid export performance, are feeling the impact of the uncertain and challenging market conditions prevailing at this time. Manufacturing and services firms are still reporting an increase in export orders, however, this is at a reduced level in comparison to this time last year.

“For businesses trading internationally in particular, preparing for a potential Brexit, including a no-deal scenario in March, then April and now October has absorbed considerable business resource. This diversion of focus and delay of investment represents a substantial opportunity cost for British business trading internationally. It is however essential that a renewed focus is placed on preparing for Brexit again in advance of the 31 October deadline. There are a number of practical steps that can be taken, despite the lack of clarity on future trading relations with Europe.

“Actions such as implementing digital customs paperwork solutions with your logistics provider, or obtaining an EORI number will help make the transition to new trade arrangements, regardless of the ultimate Brexit scenario, as seamless as possible for exporting businesses. Additionally, increasing the number of markets a business trades with reduces risk and increases growth possibilities in the long term.”

The BCC today releases the results from its International Trade Survey.