More UK exporters are reporting a decrease in orders in the opening quarter of the year, with cashflow and confidence dipping too according to the latest Quarterly International Trade Outlook from the British Chambers of Commerce, in partnership with DHL.

The report based on the responses of over 3,400 exporters shows that one in five manufacturers (23%) and service firms (20%) saw their export order books decline in the first three months of the year – the highest for both since Q2 2017 when records began.

Two-thirds of exporting manufacturers said exchange rates were of greater concern to them than in the previous three months, reflecting sterling volatility ahead of the original Brexit deadline. Exporters continue to report considerable price pressures, which for manufacturers is mainly driven by the cost of raw materials.

According to the findings, exporters are reporting muted confidence in turnover in the coming year. Nearly a quarter of exporters reported a decrease in cashflow, a key indicator of the financial health of a business – also at its highest level since Q2 2017.

The BCC/DHL Trade Confidence Index, which measures the volume of trade documents issued by Accredited Chambers of Commerce for goods shipments outside the EU stood at 124.04, representing a fall of 1% on the quarter and 2.3% lower than the same quarter in 2018. 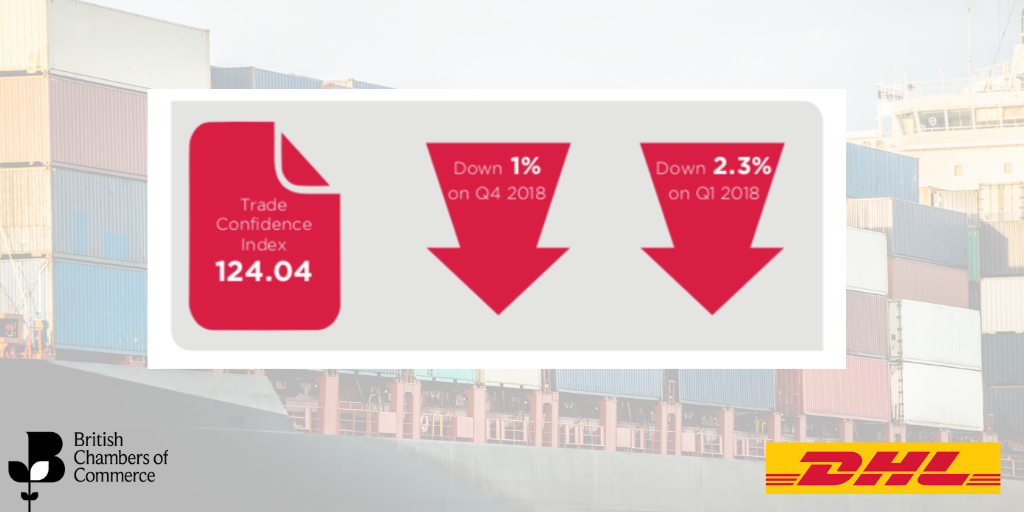 The results of the report paint a picture of tough trading conditions, and while the prospect of immediate changes to conditions due to Brexit have been postponed, fundamental questions about the future business environment remain unanswered. Clarity is also needed about the terms of trade exporters will face in many key markets around the world after the UK leaves the EU.

“It’s been a trying time for many exporters with uncertainty in the run up to the Brexit deadlines and continued trade tensions combining to flatten orders and confidence.

“The future relationship with Europe remains unresolved, but so too do the future terms of trade with many other important trading partners. Until the status of free trade agreements with third countries are clarified, UK firms don’t know how their operations in all corners of the world will be affected when the UK leaves the EU in any transition period and beyond.

“Businesses are resilient, but they urgently need parliament to overcome the current impasse and end the uncertainty. Leaving firms in limbo and allowing the political dramas to play out again at the last minute in October will only serve to diminish sales and confidence further.”

“This quarter’s report shows a small decline in the Trade Confidence Index of 1.02% on the previous quarter and 2.03% on Q1 2018, alongside a decline in export orders, cash flow and a fall in confidence regarding future exports. This paints a fairly bleak picture when the results are taken in isolation, however we’re all aware that uncertainty surrounding the Brexit negotiations was at its peak in Q1 2019.

“These results highlight how critical it is for businesses trading internationally to have information and clarity in advance of the 31 October deadline.

“Every day we witness the drive and creativity of UK businesses who prevail whatever the circumstances, and more than this, seize every opportunity for growth and global expansion. Exporting internationally can be challenging, but the rewards are clear, with those businesses exporting to a high number of countries outperforming the market. The UK has so many strong and inspirational companies that are succeeding and we must ensure that their growth is supported.”

Key findings from the report: